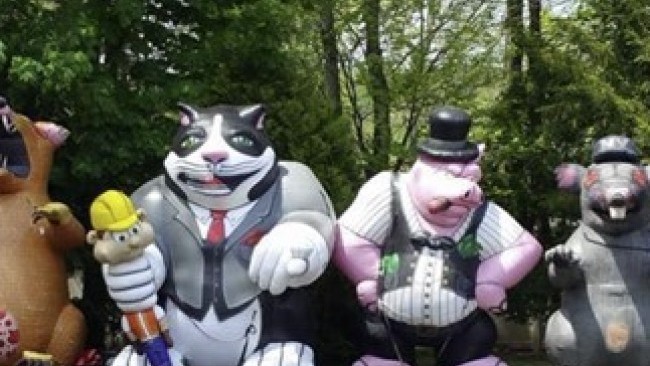 "Scabby The Rat" was originally designed for a Chicago Union in 1990. These rats have multiplied and are found thriving throughout the U.S.A. They can be found anywhere from the streets of New York to the Strip of Las Vegas and along the wharfs of the West Coast. Our rats have been seen from the front page of the Wall Street Journal to the New Yorker Magazine and the New York Times. They have been in hundreds of newspaper articles and even appeared on several T.V. shows such as the Soprano's, Blue Bloods and The Good Wife.

Are you ready to be noticed? Scabby the Rat, Corporate Fat Cat, Mother Jones and Greedy Pig inflatables are longtime symbols of labor protests. They can be seen outside factories, retail stores and just about any place where unions take a stand against hiring, labor, and wage practices. Don't see exactly what you are looking for? Just give us a call and we will customize your inflatable to fit your exact needs.

Click the links below to learn more about these effective inflatables:

The History of Scabby the Rat